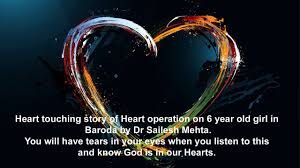 સંકલિત......                              ચિત્ર સૌજન્ય:ઈન્ટરનેટ...
The story I am going to depict is not mine. I have heard it from an external speaker who came as a guest in our company's function.
This incident happened in Baroda, India at around 2009. There is a great cardiac surgeon in Baroda called S. Shailesh Mehta. He is quite famous. You have to get an appointment at least a month before to approach him. He was actually a personal friend if the speaker who came to our gathering.
So, as the speaker and him were talking over dinner, Dr Mehta, a 69 year old man was narrating this story to him. He said that a few days back, a couple walked into his office with a 6 year old girl and the file was given to him. Apparently, there was some serious clogging issue with the little girls' heart. The couple had already consulted some doctors who gave up on her. Mr. Mehta explained the couple that her condition is bad and she need to have an open heart surgery immediately or she will have a maximum of 3 to 6 months. He added that their is only 30% chance that the girl will survive the operation. The couple cried their heart out and decided to go ahead with the surgery.
The child was admitted to hospital and the date was fixed. On the date of operation, as the nurses were preparing the girl for operation, Dr. Mehta went to her room. He had already done so many operations and he knew that their is a good chance that the girl wont make it. The following conversation happened between them :-
Dr Mehta - How are you feeling? Don't worry, you'll be alright.
Girl - I am good. But I have a question to ask.
Dr Mehta - What is it?
Girl - Everybody is telling me that I have to undergo open heart surgery. Does it mean that you open my heart completely?
Dr Mehta - Err. Well don't worry, you won’t feel pain. I will give you medicine for that. Don't worry.
Girl - I am not worried but will you open my heart? Because my mom always tells me that God resides in my heart. So, if you open it, can you just see if God is their inside. After my operation tell me how he looks like.
Dr Mehta was stumped. He didn't know what to answer. But he said he will and they continued towards Operation Theatre. The operation started. Due to clogging, blood was not flowing towards the heart. 45 minutes passed and after trying everything Dr Mehta finally told the fellow surgeons that now nothing can be done. He then remembered the talk which he had with the girl. He was feeling guilty. He stepped aside.
Just as he was remembering this talk, his fellow surgeon told him that blood is flowing in her heart.
This is an actual incident. As Dr Mehta was narrating this incident, he told the speaker that he doesn't believe in miracles. Some thing might have happened which even he can't understand. But her clogs cleared. The operation was successful. The girl's heart was perfectly fine and she could now life a normal peaceful life.
As he went back to the girl after the operation. He was not sure what to tell her. He told her "Don't try to find God. God is never to be found out. He is just to be felt. I felt it while the operation. Keep faith in him and he will help you."
As he was narrating this incident, Dr Mehta had tears in his eyes. He said that on his 40 years old career, this is most important thing he learned and that too he learned it from a little girl. He said that he may have opened thousand of hearts but this incident opened his heart. He may give the success percentage to all patients but this little girl taught him what's important is that he believes he can do that.

Yes GOD is there everywhere, we just have to have that heart to feel HIM.
GOD is so big so vast that from electron to universe and that is why we can't see HIM with our biological eyes. We are all, everythings are HIS property, HIS parts.
Whether one can believe HIM or not that does not make any difference to HIM. But without HIS blessings we just can not take a single breath.
dilipkumarbose@gmail.com
98305 47047

For those who are searching for Dr. Mehta or thinks he "apparently" doesn't exist, please check with the Doctor in the details given below.

Only believness!nothing but else..generally a child is always the reflexion of god

Who was the guest speaker? Was he our former President Lt. Dr A.P.J Abdul Kalam?

This story is a hoax. From beginning to the end.

No it's not him. Listen to some of his videos to get a feel of his voice modulation.

The guest speaker is Gururaj karjagi.
A well known speaker from karnataka.
This incident is narrated by himself in YouTube

Thru the comments preceding this one it is not clear whether the Doctor is Mehta or Gupta... This itself is causing the matter to be genuine or otherwise.
As regards Kalam ji, well the same is left to the masses of our country.

May God bless your Carrier

In our world God exists.
May God bless all the Doctors.May God Strengthens our faith in Him day by day.

What we say GOD is the Super power that cannot be seen but present every where whether we believe or not but he control every thing without his wish nothing is possible and he is invisible to our eyes but resent every where in different names.

No such doctor exists

Definitely..GOD..MY LORD..MY ALMIGHT FATHER...exist near us..in COSMIC state....in our puran once lord Ganesha asked mother parbati..how god looks like...she couldn't answer .afterwards asked LORD SHIVA...he defined...PARAM JYOTI...SACHITANANDA...means he is such a beautiful light if we see we will be so happy that we will no have any wish to live in this WORLD...SO...who he don't give us DARSHAN...very few how got his darshan like shree ramkrishna paramhans...he became sick and died....

Guest speaker may be of any name but story seems to be correct lession to have faith on nature God, sun n sky n good dr.

How the God is so mercyful enough. Thak

Thanks for sharing this useful information regards.
heart specialist clinic